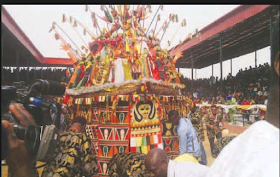 Fear has gripped the people of Umuechefu Obiuno quarters in Igboukwu, Aguata Local Government Area of Anambra State, over the presence of a shrine imported from a community in Anambra East Local Government Area by a businessman over a N10 million debt. It was gathered that residents of the community, who were told of the efficacy of the shrine, were fleeing the community in droves.

It was gathered that the shrine was brought by a five-man team sent by the chief priest, and planted in the family compound of two siblings, the debtors, at the instance of the businessman-creditor.

Vanguard also gathered that the said businessman had approached the shrine to kill the debtors, their families and others who benefit from the two brothers. Prior to the planting of the shrine, the chief priest was said to have invited the siblings to the shrine in Anambra East with N5,000 delivery service cost and a carton of beer, to defend themselves on the said N10 million debt allegation. However, the brothers were said to have ignored the invitation, which prompted the planting of the shrine in their family compound since March 18. Consequently, residents were said to have started fleeing in droves, prompting the brothers to petition the state’s Commissioner of Police, Mr. Sam Okaula, through their counsel. They pleaded that the man that took them to the shrine, the chief priest and his errand boys, who brought the shrine to Igboukwu, be arrested and prosecuted for ‘trial by ordeal.’ Their counsel described the action as mockery to the family, because as their compound had become a pilgrimage destination, where people troop in to have a glimpse of the shrine.