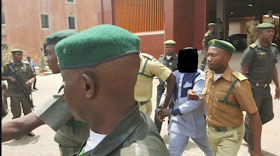 A High Court sitting in Koton-Karfi in Kogi on Monday sentenced a herbalist, Ibrahim Muhammed, to death by hanging for murdering two brothers. In his judgement, the Presiding Judge, Justice Alaba Omolaye-Ajileye, who sentenced the convict to death described his act as “high level of exceptional wickedness”.

Omolaye-Ajileye held that the prosecution had proved its case beyond reasonable doubt. This is more so, he said, as the convict had corroborated the prosecution’s submission that he poisoned Mohammed Kudu Abubakar and Umar Tanko Abubakar after snatching their car.

“I hold that after poisoning the two brothers as the accused confessed in his downright criminality, he hit their heads with pestle (Exhibit P7) to hasten their annihilation. “And, in order to avoid any trace of his brutal and inhuman act, the accused buried the dead bodies of Tanko and Mohammed in his compound.“Unfortunate for him, since nothing is hidden under the sky, nemesis caught up with him. “By the application of an unusual but most excellent investigatory dexterity, the Special Anti-Squad (SARS) of the Nigeria Police, Kogi State, exposed the apparently hidden crime.“By your own word, after poisoning both Tanko and Mohammed and they refused to die, you used a pestle to hit them on their heads. That was a brutal homicide committed with determination and ruthlessness. “The manner you committed it by your own description, make it a high-level exceptional wickedness that it can only be properly marked by death sentence, which is the only sentence I can pass on you,” Omolaye-Ajileye ruled.The News Agency of Nigeria (NAN) reports that the convict was charged with robbery and culpable homicide, contrary to and punishable under Sections 298(a) and 221 (a) of the Penal Code to which he pleaded not guilty.According to the Police First Information Report, the convict committed the offence sometime in January, 2016 at Kungbani Village in the Kogi Local Government Area.He was said to have robbed Abubakar and his brother, Mohammed of a Toyota Carina E Wagon with registration number Niger: BDA 902 AA and later poisoned, killed and buried them.Investigation by the police, however, led to the discovery of the plot by SARS, culminating in the exhumation of the decomposing bodies of the victims. (NAN)