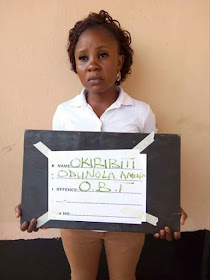 Operatives of the Economic and Financial Crimes Commission (EFCC), Ibadan Zonal office, have arrested one Okiribiti Adunola Aminat over an alleged case of conspiracy and obtaining money under false pretence. In a rehash of the old infamous advance fee fraud tact of spiritual help and solution to all problems, a victim has recounted her ordeal in the hands of a syndicate to the operatives signaling a warning to the public.

Aminat alongside other three cohorts (still at large) conspired using the decoy of providing cure and spiritual solution to the health challenges of the victim’s (name withheld) children and fleeced her of the sum of Forty five million naira (N45M).

Aminat, 34, who is married to one Wande Sesan Okiribiti, 47 (still at large) confessed that some of the money obtained from the victim was collected by her through her bank account domiciled at one of the new generation banks located in Ibadan.According to the complainant, she allegedly met Wande sometimes in October 2014 at Utako, Abuja while in search of a cure for the health challenges of her children. Wande who posed as a local herb hawker and a spiritualist capable of providing solutions to all problems of unsuspecting patrons lured her to believing he had the cure to her children’s challenges. She subsequently made different payments as advised totaling forty five million naira.However, the wool fell off her eyes when the request for funds transfers continued unabated, hence a petition to the Commission.Members of the public are however, by the experience of this victim, advised to be weary of this age long tactic to avoid falling prey.Aminat will be charged to court as soon as investigation is concluded.