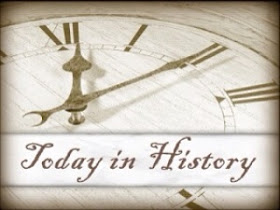 Events:
79       The volcano of Mount Vesuvius erupts and buries Pompeii in volcanic ash.
1456   The Gutenberg Bible is finished printing.
1814   British troops burn down the White House.
1853   The first Potato chips (called Saratoga chips) are prepared in NY.
1891   The motion picture camera is patented by Thomas Edison.
1932   Amelia Earhart completes her flight across the United States non-stop. She is the first woman to do so.